[Thanks to latex2wp by Luca Trevisan, this post can be formatted quite smoothly. It is likely that I will also use this tool in future posts.]

Topic for each post in this blog is intended to be only at the textbook level, i.e. not the research level. However, I might choose to present the materials from my own point of view, style, preference, etc. So the presentation does not necessarily follow any particular textbook. I will try to give motivations on why some symbols are defined, some methods are used, etc.

Some posts might be written in Thai (perhaps after I figure out how to apply latex2wp to Thai language), some in English.

Current version v3: added section 9. This is the final version of this post (for now), though there might still be some sign inconsistencies, etc. I might be able to spot these after a careful check or after gaining more insights on the big picture. In that case, I will come back and make corections.
v2: added sections 7-8
v1: added sections 1-6

General relativity or even special relativity teaches us that time and space are on equal footing. This leads to many nice, short, powerful formula. However, when we want to describe important physical quantities and phenomena, it is inevitable to study the dynamics of spacetime. In such study, the role of time and space are separated.

From the point of view of dynamics, the states of the system are changed or evolved in time. In other words, state is a function of time. For example, the motion of an object is described by the position

In this case, the state has an extra label which gives a name to each object (i.e. call them unimaginatively as object

Let us now turn to a system whose state is described by a field, which is a function of spacetime. For simplicity, let us consider a scalar function

So at an instance, say

the state is described by

this means that we need to know a number for each

So the spatial coordinates

label parts of the system.

So we have learnt that when describing dynamics of a field, time coordinate takes a role of an evolution parameter whereas spatial coordinates are essential to describe the system at each instance. This is also the case in the description of the dynamics of spacetime. So we need to break down the nice formula given by general relativity by separating time and space.

More importantly, the intuitive picture where spacetime is a four-dimensional manifold (roughly speaking we need

numbers to describe each point in spacetime) is no longer useful when describing the dynamics of general relativity. Instead, one needs to slice the spacetime to hypersurfaces (as a rough intuitive picture, think of a loaf of bread as representing the spacetime. Each slice will represent each hypersurface.) of constant time. This is the basic idea of the setup of 3+1 formalism of general relativity.

This post aims to describe setup and basic calculations of 3+1 formalism of general relativity. I will be using index-free notation as much as possible when writing this post. I found that the advantage of index-free notation over index notation is that it allows us to directly relate each symbol with the corresponding geometrical object instead of, as usually the case of index notation, viewing symbols as representing arrays of numbers.

For background reading on index-free notation, the first chapter of Advanced General Relativity by Winitzki is a good place to start.

be a 4-dimensional manifold, and let

be a hypersurface at constant `time’.

What do we actually mean by constant time? Roughly speaking, if

[NB: To be more precise,

is only defined on an open subset of

But let us ignore this and various other precise details in this post.] then

corresponds to some constant value of time

To be more precise, let us adopt the viewpoint that whenever we mention coordinates, we always mean coordinate map. So

can be thought of as an embedding [NB: I am not being mathematically careful with the word `embedding’. I am not sure if this would coincide with the exact mathematical term.] in

by using a map

be coordinate map of

is chosen in such a way that

denotes the pull-back. It is easy to check that indeed

Actually, this is still not enough to say that

is a hypersurface at a constant time. To be precise, we require that

is a constant map, i.e. for every

is a specific number.

Having defined the embedding

we can use it to get the induced the metric on

In order to do so, let us first examine how coordinate basis of vector on

transform under the push-forward map 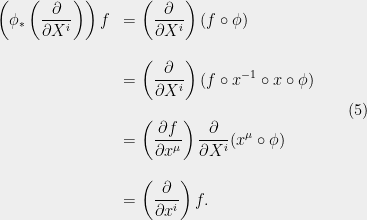 We are now ready to compute the induced metric 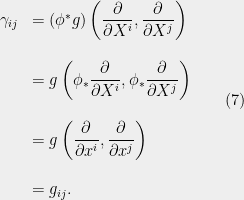 The unit normal to hypersurface

is given by the 1-form

is a function, called lapse function. In order to see that

is really a normal to the hypersurface, we can check that

annihilates every vector on the hypersurface (roughly speaking, this condition says that dot product between

and any vector on the hypersurface is zero). That is

Let us take the signature of spacetime manifold

Then in order for

to be a unit 1-form, it has to satisfy

Next, one can define the projection operator projecting 1-forms to the direction of

It is given by

maps a 1-form field on

to a vector field on

For details on usage of

and other related notations see for example the first chapter of Advanced General Relativity by Winitzki. It can easily be checked that

is the identity map.

In general, the projection of

is non-vanishing. Intuitively, this means that

does not necessarily align with the normal 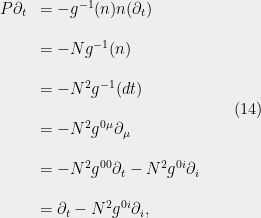 By comparison with the identity

it can easily be seen that

In the previous sections, we have shown how to write some components of metric or inverse metric in terms of the information relating to the hypersurface. The results are

In order to obtain the complete decomposition, let us make repeated use of

This gives, after some algebra [which is left as a simple exercise to the readers],

is the matrix inverse of

There is an interesting idea raised during one of the discussions in Tah Poe School 4. Thanks to Apimook Watcharangkool, Khamphee Karwan, Pitayuth Wongjun, and others for raising the question, encouragement, and discussion. Basically, one which to investigate what happens if one swaps the role of

I will attempt to investigate this issue in this section. I might also come back or writing a new post after I gain more insights into this issue.

The geometrical meaning of

is as the normal to the hypersurface

at constant time, whereas the geometrical meaning of

is as a vector field whose integral curve is parametrised by time coordinate. In the orthodox point of view, the lapse function is defined based on

So it is natural to talk about the projection

along the normal of

. Now if one defines the lapse function based on

it is only natural to talk about the projection along

i.e. how to describe the hypersurface perpendicular to

Putting geometrical consideration aside, let us formally work out the decomposition. In this way, one may define alternative lapse function

we have now decomposed the spacetime metric. In order to get the decomposition of the metric inverse, let us make a repeated use of

Undergraduate physics students in Thailand should have all seen usage of frame fields. In fact, they encountered frame fields even before coordinate basis. Frame fields that are introduced to them in the form of unit vectors [It looks to me that sometimes physicists do not distinguish tensors from tensor fields. So to be more precise, what I meant by `unit vectors’ is in fact `unit vector fields’.] corresponding to each coordinate.

As an illustration, consider polar coordinates

They are related to Cartesian coordinates as

[Note that in the above equations, we can also view

all as functions on

The RHS of each of the above equation are understood as based on function multiplications: for

function multiplication is given by

In the Cartesian coordinates, unit vectors along

coordinates are respectively called as

For polar coordinates unit vectors along

coordinates are respectively called as

as being vector fields, and then makes use of the fact that vector fields form a module over scalar function to realise that the product between a scalar field and a vector field, e.g.

which are orthogonal to each other) at each point on

(to be more precise, on

). This can easily be extended to other cases, and especially to general relativity, in which a frame field assigns four unit vectors at each point on spacetime.

Let us call this unit vector field as

Let us call them as

Suppose that we have managed to pick the desired frame field. In this case, the metric inverse will take the form

is diagonalised in the basis

are chosen such that

In fact, the `choice’ of

as can easily be seen from the simple manipulation 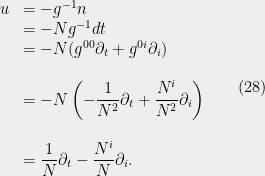 Having chosen a suitable frame field, let us also choose the corresponding coframe field to be

is already chosen correctly by construction. As for

it is given in the form

The derivation of eq.(30) is left as a simple exercise [Hint: write

]. Next, it can easily be seen that the metric from eq.(19) can be written using coframe field as

It is useful to give more comments on properties of

Note that the types of tensors do not change. However, indices

This operation swaps the the role of

In general relativity, Einstein-Hilbert action is given, up to an overall constant, by

is Ricci scalar. We want to put the action in the 3+1 formalism. This can be done by separating vector basis

Although it is not necessary, let us make use of frame field in order to obtain the result.

We start from collecting the frame field as

and collecting the coframe field as

These indices are raised/lowered by

for any vector field

Next, we quote some useful equations.

View all posts by pichet vanichchapongjaroen

This is a text widget, which allows you to add text or HTML to your sidebar. You can use them to display text, links, images, HTML, or a combination of these. Edit them in the Widget section of the Customizer.
<span>%d</span> bloggers like this: