Some prerequisites: complex analysis, Fourier transform, Laplace transform (optional if you are a physicist).

In this post, I will solve Maxwell’s equation with source term. This would provide an idea on what it means by “propagation”. Of course, as in other posts for this blog, the material is standard, but I present it in the way that I prefer. Note that at some points of this post, the presentations are not rigorous as I still do not completely understand this subject. Furthermore, I am stuck at the final step where I have no idea if the final integral can be integrated out.

Before directly working with Maxwell’s equations, let us consider an important toy model. Consider a field

Suppose that it is influenced by the source

through the inhomogeneous differential equation

In fact, I have made use of the convention by setting speed of light

In more details but still rough, the field

is modified in response to the presence of the source

Having read the above sentence once let me repeat it again, but this time I include symbols and more details:

“ Let us suppose that initially

, the source is absence

and the field is identically zero everywhere

During the time when the source is still off, the field remains zero, i.e.

But once the source is turned on, the field in influenced by the source through eq.(1):

We would like to describe the values of the field after the source is turned on, i.e.

The first step in studying this problem is to solve eq.(1) by Fourier expanding the source and the field as

where the integral range for

and the integral range for

But in the calculation, we will see that

) is a real number whereas the one for Laplace transform is a complex number. But physicists remedy this by saying something like `well, in order to describe the real world, let us allow the frequency in Fourier transform to be complex. The imaginary part will instruct how the amplitude of the wave decays’. I think this is not necessary because one should have used Laplace transform in the first place, and the decaying of the amplitude would already be taken into account.] However, being trained as a physicist for so long, I am not so familiar with Laplace transform. So let me instead keep using physicist’s convention by working non-rigorously with Fourier transform and extends the variable to be complex when necessary.

In fact eq.(3)–(4) are still not suitable with the subsequent calculation. In order to do so, needs to impose an extra real-world condition into account. Suppose that when turning on the source, its value does not jump up at instantly. Instead, its value gradually increases. This is known as adiabatic approximation. In order to model this, we introduce a factor

to the field and source:

Substituting into eq.(3) and using Fourier transform [Until I can find a rigorous or satisfying explanation, let me be sloppy with the factor

by intentionally forgetting it from time to time.]

This equation is in the form

is called Green’s function. In our case, it is given by

where we have made use of the Sokhotski-Plemelj formula

being the principal part. Let us now proceed by considering

is Heaviside step function. Let us use spherical polar coordinates in the space of

axis” is aligned with

So the integral above simplifies as follows 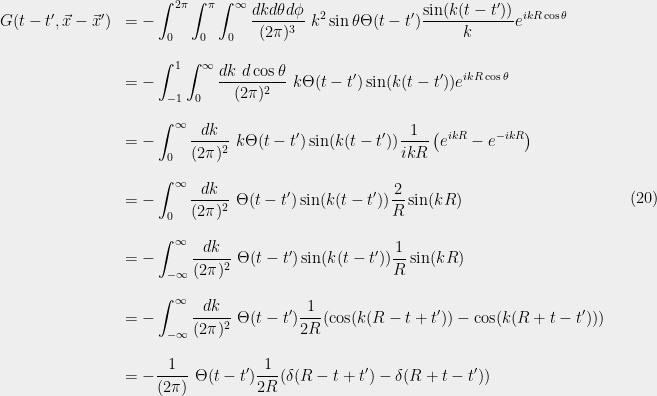 In the above equation, each step is a simple manipulation and is left as an exercise for interested readers, especially students. [In fact, I do not feel like explaining the calculations in each step.] Next, note that due to the presence of

which in turns implies

Therefore, the second term in the last line of eq.(20) does not contribute. This leaves us with

The interpretation is that

is the value of the field measured at

and is obtained from the superposition of the response from the source. The sourse at

will spend the time

to reach and influence the field situated at

[the speed of light

is restored to make the argument clearer]. So one could say that the signal from the source travels with the speed of light.

and indices are raised and lowered by

It is often convenient to impose Coulomb’s gauge

It is usually useful to separate the components

into transverse and longitudinal parts. To be more precise, let us expand

We see that in fact each mode has

By a very simple vector analysis, the longitudinal part of the mode (25) is given by

So we define the longitudinal part of

to be the superposition of the longitudinal part of is mode. That is

This in turn gives

That is, Coulomb gauge condition demands that the longitudinal part of

By following a similar analysis to the one in the previous section, one obtains, in parallel to eq.(11)–(12), 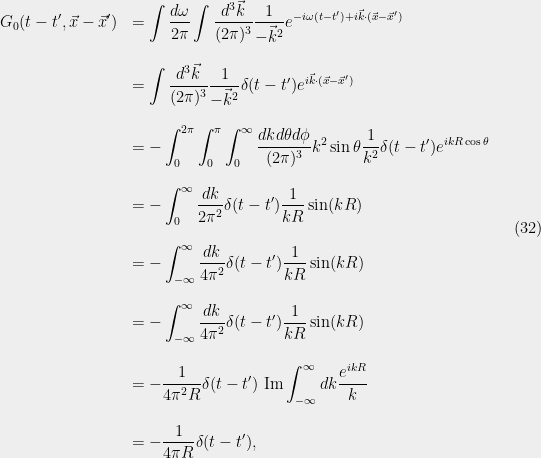 The interpretation for this result is that

is only influenced by the

of the source. Furthermore, once the source is turned on,

is influenced directly. The signal does not need to spend time travelling. So

Let us now consider the component

Then by using the result of the previous section, one obtains

is propagating. The source at

needs to spend time travelling to

with the speed of light

Next, in order to read off Green’s function, let us slightly rewrite this equation as

From this, one can read off Green’s function as

I have no idea whether the integral in the final stage can be integrated out.

View all posts by pichet vanichchapongjaroen

This is a text widget, which allows you to add text or HTML to your sidebar. You can use them to display text, links, images, HTML, or a combination of these. Edit them in the Widget section of the Customizer.
%d bloggers like this: